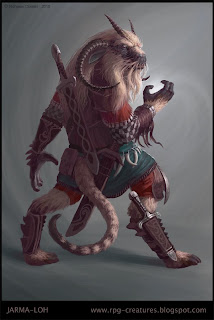 One of my very few complaints about Mongoose RuneQuest II was the paucity of monsters in the core rulebook.  Now, this is going to be rendered moot very soon with the release of the Monster Coliseum book, and we have the MRQI Monsters and Monsters II books that don't need much conversion.  However, for the most part the monsters we have are tried and true and it is hard to see where new monsters are going to come from.  Well, until now.  Check out RPG Creatures.  This guy not only describes his monsters and provides generic stats, but he posts quite beautiful pictures of them as well (see example to the right).

That'd be pretty good on its own, but reading through the generic stats it becomes clear that conversion to MRQII stat blocks is going to be a piece of cake.  Not only that, but most of the descriptions feel right, with a bit of tweaking, not just for RQ, but for Glorantha.  A lot of these are going to show up in My Glorantha, somewhere.

Thank you, Nicholas Cloister, thank you.

In Memoriam: Gygax on Taxes

In memory of E. Gary Gygax, who died two years ago today, here are some of his thoughts on taxes, from the first edition of the Dungeon Master's Guide:

What society can exist without revenues? What better means of assuring revenues than taxation, and all of the names used in the title of this section are synonymous with taxes - but if it is called something different perhaps the populace won't take too much umbrage at having to pay and pay and pay...

If the Gentle Reader thinks that the taxation he or she currently undergoes is a trifle strenuous for his or her income, pity the typical European populace of the Middle Ages. They paid all of the above, tolls being very frequent, with those trying to escape them by use of a byway being subject to confiscation of all goods with a fine and imprisonment possible also. Every petty noble made an extraction, municipalities taxed, and the sovereign was the worst of all. (Eventually merchants banded together to form associations to protect themselves from such robbery, but peasants and other commoners could only revolt and dream of better times.)

Posted by Swordsman at 8:05 PM 3 comments 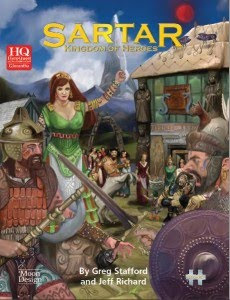 The old Runequest 2 (not the new one I review below), had what can fairly be described as a legendary section that previewed "sources to be published," most of which have either never seen print or have only done so in vastly changed form.  One of them was:

THE SARTAR CAMPAIGN: Maps, personalities, histories, local cults, and other material about the storm Kingdom of Sartar.  Includes tribal specifics, extensive Road Encounters section, and a full explanation of the Orlanth cult.  Based on the campaign led by Greg Stafford.

Almost thirty years later, that sourcebook is finally here.  And perhaps it's the Gloranthan fanboy in me speaking, but it's been worth the wait.

For many years virtually all I knew about Sartar came from playing the game Dragon Pass, in which it was clearly the plucky little underdog with a barbaric (in the classical sense) culture taking on the hyper-civilized Lunar Empire.  With Lunars often having Roman names, I could not help but think of Sartar as Gaul or Britain.  In fact I often thought of developing a small village holding out aganst the Lunar invaders, aided by the unique magic of their priest.  The chief, Tonobri, would be carried everywhere on a shield, but the village's main assets would be two warriors, Steri and Obel...  Perhaps I shall put that clan together some day - the new book makes that easy and interesting, but I'm getting ahead of myself.

Back before he became a best-selling author, Raymond E. Feist published some pretty good old school town/city supplements based in what was to become the famous world of Midkemia.  Of these, I still have the workable city of Carse, which actually found its way to Glorantha as the city of Karse in the Holy Country.  However, my first Midkemian purchase was Tulan of the Isles, which I thought was a splendidly developed town built on several islands in a river.  It even had its own dungeon, The Black Tower, which was available as a separate product.  Yet my local game store never had it in and I'd given up paying shipping by that stage.  Exploring around the old school blogosphere, what do I find tonight but Midkemia Press's residual website, which includes a free download of The Black Tower.  Now if only I could find Tulan of the Isles...

Duke Raus took the news of possible chaotic activity, more than just broos, in his lands at Rabbit Hat with little humor. He instructed the PCs to clean out the place, and to aid them sent with them Dranbar Chaosknower, a Lhankor Mhyte expert in chaos lore, Gorkin Rockbone, a Flintnail rock dwarf whose experiences as a pestle (don't ask) had scarred him for life, and the beautiful Marcilla, a High Healer of the White Lady. The party set off for Rabbit Hat with some trepidation and wondering whether Subodai's chaos-killing skills might have protected him. On the way, Grom noted that Marcilla would occasionally speak to a butterfly that flitted around her, and the dwarf would occasionally talk about not letting his secret out.